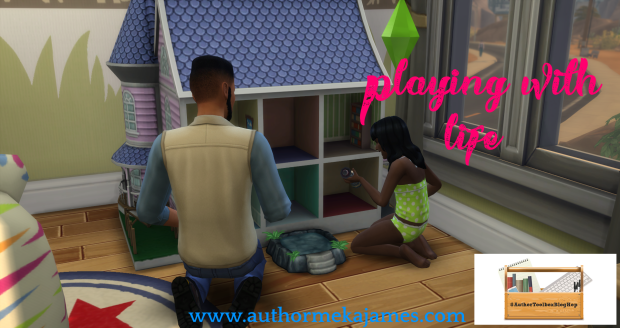 Welp it’s a new month, and it brings about my second post for the Author Toolbox blog hop. Like last month I struggled with what I would write about. Again this “giving advice” thing isn’t really for me. But gonna give it the old college try.

Anyone that knows me, knows I stumbled into this author gig quite by accident. I’m not a person that lives and breathes writing. Not in the way many will talk about. I started writing for fun. In 2010 I began playing a PC game called The Sims 3. It was fun to have control over the pixelated people I’d created. As I played, little stories about their lives would roll through my head. I mean the tag line for the game is “play with life” and as writers isn’t that what we do with the stories we tell? We create characters from scratch, and give them life.

About a year in I discovered Sim Lit, blog stories that were illustrated with game shots to enhance the reading experience. It was an eye-opener for me. The stories that played out in my head with the game could be put into words, and people would want to read it. Let the fun begin right?

As I’ve been struggling with direction and the stress of writing I’ve gone back to re-reading my own sims stories as well as ones written by writers that I follow. That prompted the idea for this post. What “playing with life” aka writing sims stories has taught me about writing in general.

I know this is something that gets tossed around a lot. Not sure why, but it does. While I’m not advocating for people to run out and publish the first drafts of their books, I do want to recognize that not all first drafts require major work before they are ready for the world. Most sim stories are done in a serial format meaning you get the story spoon-fed to you chapter by chapter on what could be an erratic schedule. Most of those stories are usually the first-ish draft of that chapter. The time to overthink and second guess is taken out of the equation. The writer goes with their gut on the direction of the story and the plot and that’s it. It’s not a bad way to handle things because too often I get stuck in a cycle of second guessing. Having the mindset that the story at its core is solid the first time out aids in taking one less worry off the table. And I’ll say again. Edits are made, tweaks to the plot adjusted, but the first draft isn’t always a complete dumpster fire. 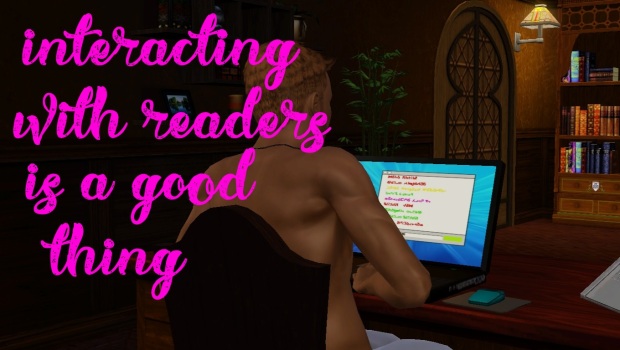 In the writing world we are told to not respond to reviewers. Readers and writers should travel in different circles that don’t overlap. That once you put the story out into the world, it’s no longer ‘yours’ and that is all rather sad. One of the joys of writing a sim story was the direct access you had with your readers. They left comments on your blog, you answered it, you knew they were invested. And in some ways, those comments would help shape the story. It was a good thing to get that insight to have that interaction. I miss it. I mean we write to entertain our readers, why is that invisible wall there? 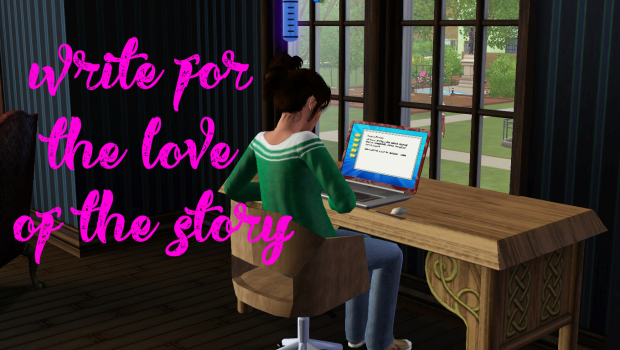 When you write a Sim story you aren’t getting paid. You write because you are moved to tell a tale and you post it because you want to share it with others. Sometimes in all the hustle and bustle that is the writing world, writing for the sake of writing can get lost. Writing sim stories reminds me of the joy of creating without all the added worries. Sure I care about what I put out, but it’s in its purest form of simply being creative. Letting the story flow, the characters take shape and do what they please. Just to enjoy the journey.

So that’s it. The three lessons doing sim stories have taught me in my authorly journey. And it’s what launched my career. My first book began as a sim story. Jill, who the book is dedicated to in memoriam, was my biggest fan of the story in that format and convinced me to make it ‘real world’ so it could be a book. Without her, I don’t know if I’d be on this path, but I’m forever grateful.

I’ve learned and have grown as a writer since this book was released into the world, but as it stands, for my indie titles it’s still my best seller.

21 thoughts on “#AuthorToolBoxBlogHop- Playing With Life”